This page is a part of the Civ5 Modding Tutorials. 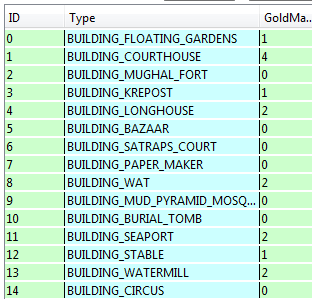 View of the snapshot using SQLiteManager

If you correctly set up your #Configuration, whenever you start a game, Civ5 saves some logs under My Games/Sid Medier's Civilization V/cache/Civ5DebugDatabase.db.

If you correctly set up your #Configuration, whenever you start a game, Civ5 saves a snapshot of the database under My Games/Sid Medier's Civilization V/cache/Civ5DebugDatabase.db

If you correctly set up your #Configuration, Civ5 will send all the Lua output to the Firetuner (and also to the Lua.log file). This includes all the debugging output but also any error that may arise, with their calls stack traces.

Note that paths are truncated in the provided example, which makes debugging harder sometimes. This happens when the file is in a context registered by the project's content tab. Here are the workarounds:

print(...) can be used to print anything to the Firetuner output. This allows you to check the flow of a program, or the values of variables. Print calls tostring on every argument and displays them all on a single line with tabulations as separators between them. Nil values are not displayed, so it is advised you provide expressions such as: (expr or 'nil')

error(string message, int level = 1) throws an error with the specified message. The execution is then halted and the hand returned to the game engine (or the current protected call if you did use pcall or xpcall). The level parameter controls the error position that will be reported. 1 for the line where error is located, 2 for the function call that contained an error, etc. 0 for no position.

assert(variant condition, string message = "assertion failed") can be used to assert the provided condition is neither nil nor false (everything else is evaluated to true in Lua). Otherwise, an error with the specified message is thrown. You can use them punctually, as a debugging technique. But they may also be used as a defensive programming technique similar to design-by-contract: the idea is that whenever your program's correctness relies on an assumption, you should explicitly check it. For example, if a function takes an array as an argument and assumes that it is not empty, you should add two conditions at the beginning: assert(type(t) == "table") and assert(#t > 0). This makes the code more self-explanatory (implicit assumptions are now explicitly stated) and it allows you to catch bugs as soon as possible, which typically makes them easier to understand and fix.

Most of the time, when one of your user encounters an error with your mod, he just stops using it. A fraction of them will do the effort of reporting bugs but too often the informations they provide is unusable (from "it doesn't work" to wrong reproduction steps "play until turn 173 and wait for Mars being aligned with Venus"). The best way to increase the number of reports and their usefulness is to let your mod tell them the info it needs, as illustrated below.

In-game editor tells its users what they must report, even including a calls stack trace when available. The user only needs to make a screenshot that will then land on his Steam profile (provided he didn't change the Steam settings). Reporting made easy!

The Lua introduction for confirmed developers describes a number of techniques you can use to achieve similar results. Here we present an implementation you can use to handle errors in the most dangerous parts of your code in order to present them to the user. The message will even include a full stack trace when available (you can provide your users a link to the #Configuration section and ask them to modify their config.ini).

The Civ5 Useful Programs page presents you a number of tools you can use to inspect or modify the game. This is especially useful if you want to quickly reproduce a bug or test something, or to understand what is happening.

Look for the following files under My Documents/My Games/Sid Meiers' Civilization V and open them in a text editor like the notepad (not in a word processor).