This page is a part of the Civ5 Modding Tutorials.

This article explains the Virtual File System (VFS) in Civ5. Lua developers looking for informations on the include function should look at Specificities of the Lua implementation in Civ5. 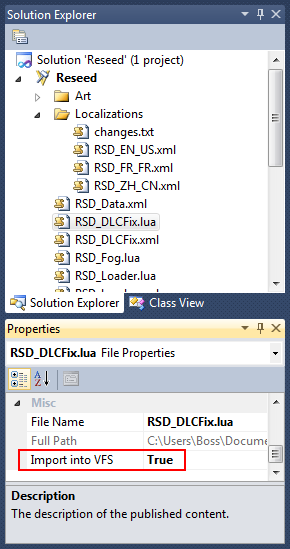 The import into VFS option.

VFS stands for Virtual File System. Rather than locating the files directly in the file system, Civ5 looks for them in its virtual file system. This system provides the following benefits:

Determining whether a file must be imported or not

In doubt, import your files into the VFS. But you should better stick to what is written here.

Must be imported the files that are requested during the game.

Should not be imported the files that are loaded through the project's content and actions tab (except the XML UI files, those ones should always be imported). While this is harmless most of the time, this can sometimes result in unexpected side-effects.

Importing a file into the VFS